Wimpys Star Chic is a 2015 chestnut filly by Wimpys LittleColonel out of the GREAT mare Myo Starlight. Wimpys LittleColonel is a 2009 palomino stud by the all-time great Wimpys Little Step! Wimpys LittleColonel has won over $144k in the NRHA! And his first foal crop hits the show pen in 2018! He is a full sibling by blood to wimpy little chic. You can’t ask for a stronger bottom side! Myo Starlight has an LTE of $13k+ and has produced $325k+ and 2016 equistat leading nrha dam! And just ranked top 5 broodmare! “Chic” is a half-sister to the 2016 Level 4 futurity winner Spooky Whiz (LTE $150k still showing) and half-sister to Lil Dreamin Magnum (LTE $107k+) just to name a few! Chic was started in January of this year as a 3-year-old.. She circles low headed and soft! Can’t-miss a lead on this filly! Shes super quick-footed in her turns and shows a lot of potential for the four-year-old redshirt derbies next year!! And can’t ask for a better-bred mare to breed down the road! 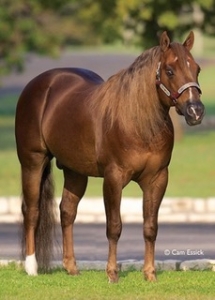 Bandit – For Sale
Scroll to top